Posted by Anthony Celestine on October 29th, 2020 Under NEWS 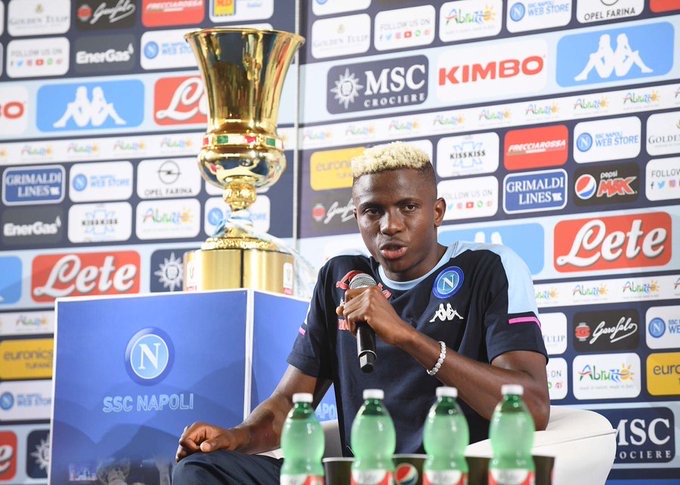 Super Eagle towering striker, Victor Osimhen told Tuttomecartowebb that it still hurts to have missed out of a mouth-watering clash against Juventus early this month.

The defending champions were awarded three points after Napoli failed to keep a date with Juventus due to the second wave of  Covid-19 in Italy. With two positive Covid-19 tests before the game, Napoli were ordered not to travel by their local health authority.

He then described Serie A decision to dock Napoli of three maximum points for no show as unfair given the recent spike in the Covid-19 cases in Italy with Turin and other cities becoming the epicenter of the virus.“I don’t know, but there was the Covid situation, it is the reason why we were unable to travel. We were loaded for the match, we were blocked by Covid rules. It is a decision a little unfair that taken later.”he told Tuttomecartowebb.

The former Royal Charleroi striker also stated clearly that there is still room for improvement under Gattuso despite hitting the ground round running since coming to Italy.

“For me it is a dream that comes true because I saw him play and playing for Gattuso is a great stimulus. I can grow not only as a player but also as a man and I’m sure I will improve”, he added.Osimhen opened his Serie A goal account in Napoli’s 4-1 victory over Atalanta at the San Paolo Stadium.

He then celebrated the goal in style with the display of “end police brutality in Nigeria protest shirt. The former Lille of France striker, who was in terrific form for the Naples during the preseason, had failed to score after three league games.