« 11-year-old Boy Dies After Drinking 5 Bottles Of Beer During Drinking Competition | BBNaija: See the housemates up for possible eviction » 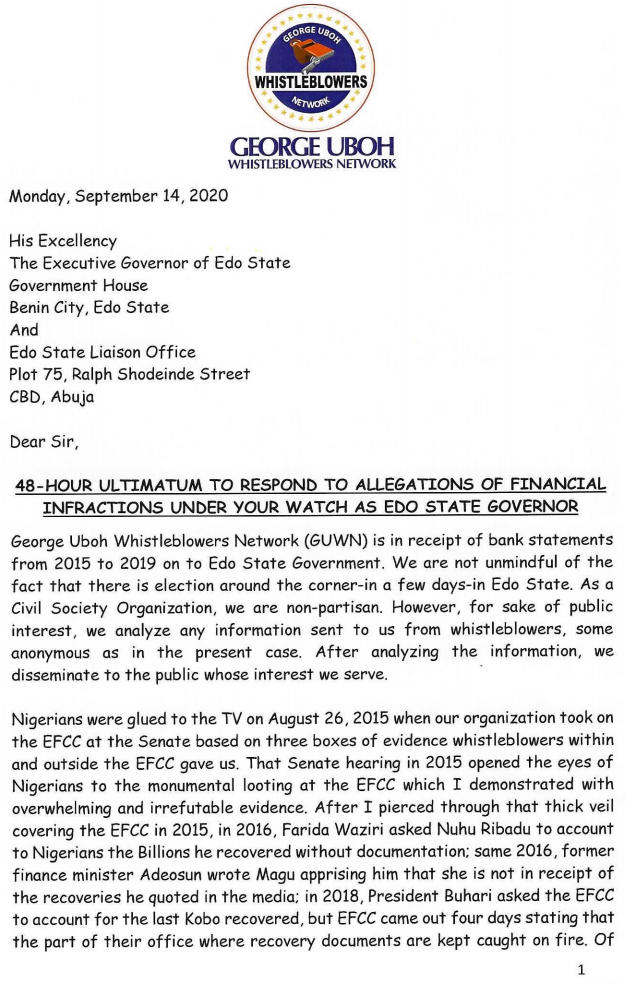 A transcript of the press conference referred to the Executive Governor of Edo State, reads:

George Uboh Whistleblowers Network (GUWN) is in receipt of bank statements from 2015 to 2019 on to Edo State Government. We are not unmindful of the fact that there is election around the corner-in a few days-in Edo State. As a Civil Society Organization, we are non-partisan. However, for sake of public interest, we analyze any information sent to us from whistleblowers, some anonymous as in the present case. After analyzing the information, we disseminate to the public whose interest we serve.

Nigerians were glued to the TV on August 26, 2015 when our organization took on the EFCC at the Senate based on three boxes of evidence whistleblowers within and outside the EFCC gave us. That Senate hearing in 2015 opened the eyes of Nigerians to the monumental looting at the EFCC which I demonstrated with overwhelming and irrefutable evidence. After I pierced through that thick veil covering the EFCC in 2015, in 2016, Farida Waziri asked Nuhu Ribadu to account to Nigerians the Billions he recovered without documentation; same 2016, former finance minister Adeosun wrote Magu apprising him that she is not in receipt of the recoveries he quoted in the media; in 2018, President Buhari asked the EFCC to account for the last Kobo recovered, but EFCC came out four days stating that the part of their office where recovery documents are kept caught on fire. Of course, there is currently an investigative panel on the EFCC. These are all vindications on our part regarding the EFCC

Thereafter, we have handled numerous cases dealing with corruption within the Executive, Legislative and Judiciary. Recently, we received information on the Vice-President, His Excellency, Professor Yomi Osinbajo from whistleblowers which seemed as if the VP interfered with a criminal investigation. We wrote the VP on August 10, 2020 attaching the evidence in our possession, and gave him 7 days to respond to Nigerians (whose interest he is representing) as to why we should not declare him unfit to be the VP. Same day, the VP responded attaching evidence to show he did not interfere, asking us to let Nigerians know the outcome of our investigations. after analyzing the VP’s response, we exonerated him and issued a statement and video in that regard.

In the instant case, we posit that if the VP, the Number two citizen in Nigeria who is cloaked with immunity can humble himself to respond to us same day we wrote him, we hereby issue His Excellency, Godwin Obaseki, a 48-hour ultimatum to respond to our allegations. It should be noted that although we found suspicious transactions in multiple years, however, the suspicious transactions became rampant and egregious in 2019, hence our conclusion that His Excellency, Godwin Obaseki allegedly siphoned funds in preparation for the election.

*We found numerous transfers made into 8-digit account numbers running into Billions of Naira;
We found numerous transfers in Billions of Naira from Edo State Government to General-Purpose accounts in different banks, including but not limited to Equatorial Trust Bank (which is not in operation), Access Bank, Sterling Bank etc. Posers: what does general-purpose stand for? Are these funds dissipating from these general-purpose accounts in these banks? The red flag is clear and convincing.

*We found Billions of Naira in transfers to Ministries, Departments and Agencies (MDAs) without being specific on the particular MDAs. Transfers should not be in bulk figures in Billions of Naira without specifying the MDAs and their respective account numbers.

*We found that Billions of Naira passed through Edo State Government to companies like A&K Construction without specifying the accounts of the companies. in other words, Edo State Government released money to itself, mentioned companies like A&K Construction without mentioning the recipients’ accounts. Without those details, we can conclude that the monies have no destinations.

*We found that Billions of Naira were transferred in numerous tranches without account numbers and account names of the purported recipients.

*We found Billions of Naira debited as Value Added Tax (VAT). This contravenes common sense. VAT should be a credit not debit. Why would you move Billions out and give the narration as VAT? VAT collections are credits not debits.

Billions of Naira released as salary from EDSG without specificity. August 2019 alone, N746,622,765:33 and N693,388,159:31 were moved under the narration salary from EDSG. This is very suspicious, particularly the proximity of the transactions and others above to the election.

Based on the foregoing allegations, we hereby issue you a 48-hr ultimatum to react to the following. Attached please find the requisite bank records. We remain,

Yours in whistleblowing services,


« 11-year-old Boy Dies After Drinking 5 Bottles Of Beer During Drinking Competition | BBNaija: See the housemates up for possible eviction »