Posted by Daniel on October 7th, 2020 Under NEWS 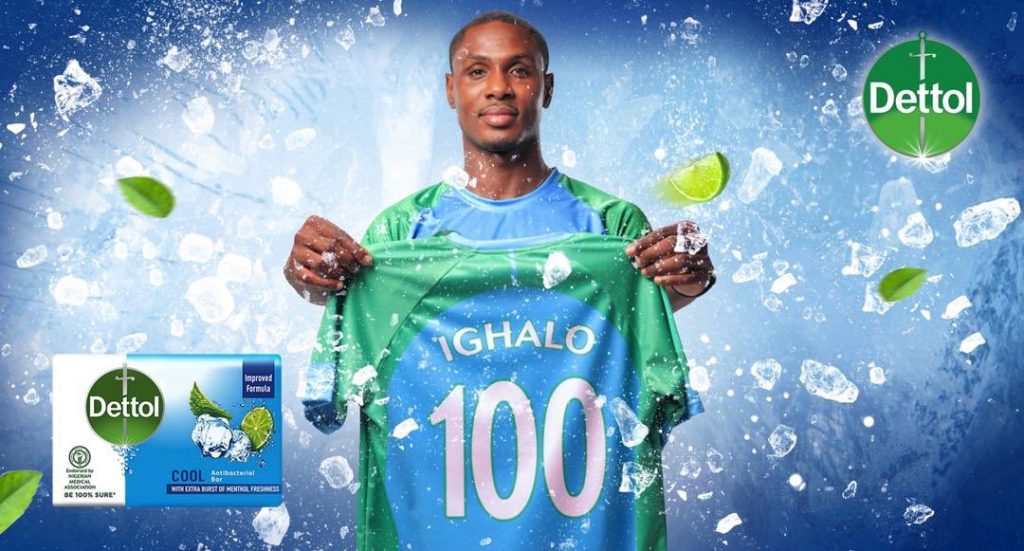 The striker arrived from Chinese Super Leagueclub Shanghai Shenhua on a temporary loan deal on the final day of the January transfer window, to provide Ole Gunnar Solskjaer with cover for the injured Marcus Rashford who was sidelined with a back issue.
Announcing the pact via his social media handle, the 31-year-old said that as a sportsman, he shares similar values with the Dettol Cool brand – which includes staying protected from germs as well as staying fit and healthy.

*“As a professional footballer, staying healthy and germ-free is a critical part of my life,” the former Watfordman said.
“I’m very excited about the new Dettol offering because nothing feels more refreshing after a game, than the minty freshness that comes after a bath with the new Dettol Cool Soap.”

The new Dettol Cool soap combines the trusted Dettol protection against 99.9% odor causing germs, with an extra burst of menthol freshness to protect and refresh Nigerians as they go through their daily activities.

General Manager of RB Nigeria Dayanand Sriram is pleased about the partnership which he described as a ‘winning combination’.

“Odion Ighalo is a great success on and off the field. He is a role model and inspiration to all Nigerians,” he said.

“We are very excited about the Dettol Cool partnership with him and we are confident that this would be a winning combination.”

After playing 35 matches and scoring 16 goals, which ranks him as the seventh all-time highest goalscorer in the Super Eagles history, the striker took the decision to bow out for younger ones to ‘learn and grow’.
He was awarded the top scorer’s prize at the 2019 Africa Cup of Nationsin Egyptafter scoring five goals in seven appearances for Gernot Rohr’s team.

Ighalo commenced his career as a youth player in the U20 team and later made his senior debut during an international friendly match against Ugandain March 2015.